I received Jase’s one year old pictures in the mail this week and I just had to share them. Let’s just say, he was not impressed to take these. He’s so busy that it was hard to get him to even sit still for more than 2 seconds. I was sweating 10 minutes into it from chasing him around the studio. I’m sure other mothers can agree with me, when they are this age the don’t do anything that they don’t want to do. The world is too new still and exploring (and tasting everything) is way more fun. When Jase was 10 days old we had newborn photos taken. We were there for almost 3 1/2 hours and he slept for the first 3 of them. It wasn’t until she wanted a few photos of Jase and I that he woke up! Probably because he smelt me and his milk. Let’s face it, I was a mess and still recuperating from his birth and the sleepless week I just endured. I probably reeked of baby throw up!!! At 8 months, we went back and took other photos outside and he loves being outside so he was so good at just sitting in whatever position we put him in. Now at a year, he never stops. My point is, he is growing up way too fast for my liking. He has been so sweet the last week and coming up to me and cuddling with me on the couch. He use to do this all the time and we did a lot of cuddling in the middle of the night (he didn’t sleep through the night until was almost one!) and in this last month and a half it seemed like he was over cuddling with his mom. I’m hoping it was just a phase because I just love his snuggles. I know he won’t want his mom forever (dad is becoming a lot cooler these days..), so I will soak it up every chance I get. 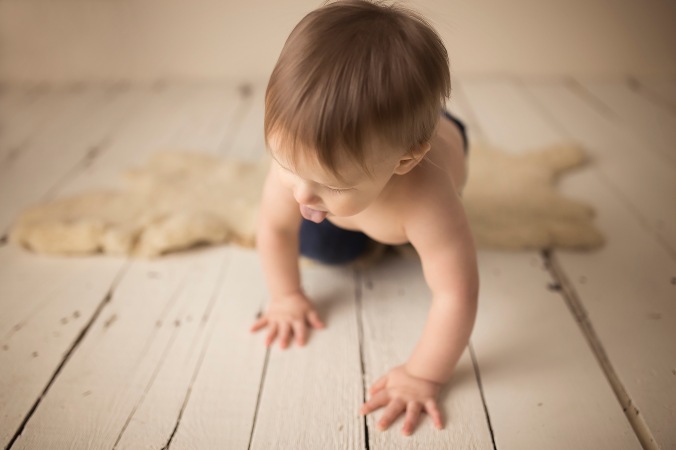 So here’s a photo of him “not impressed.” HAHA! I can only imagine what he’s thinking..probably something on the lines of “Mom, your peek a boo is not funny anymore” or “Why don’t I have a shirt on?” or “I’m never doing this again.”

And of course his mommy’s boy photos. 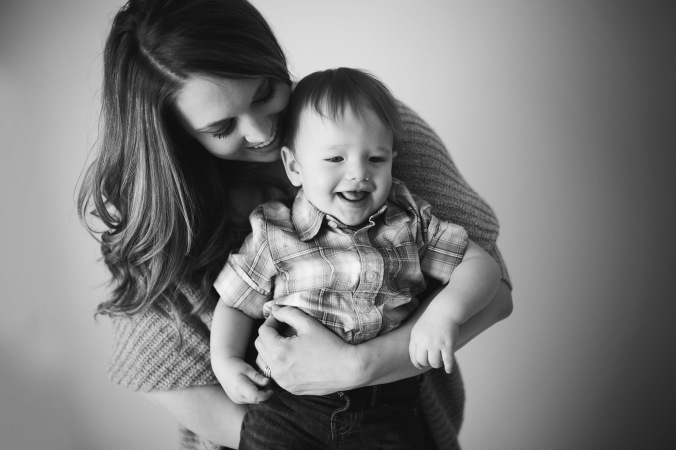 Chaos at bedtime? SleepyIze to the rescue! • We are still adjusting to our new school routine and that means getting to bed earlier than normal for us. We’ve been using SleepIZe to help create an atmosphere that supports peace and relaxation. • SleepyIze essential oil blend is formulated just for kids and already comes pre-diluted. It helps create that peaceful aromatic environment that your kiddos need at bedtime so they are ready for those early mornings. • Try diffusing SleepyIze in your kids’ rooms, massaging it on their feet, or applying it on their backs (Or use it on yourself too). • SLEEPYIZE INCLUDES: • Coconut oil • Bergamot • Geranium • Tangerine • Lavender: Soothing and calming to the mind and may help reduce occasional nervous tension • Roman Chamomile: Which has a relaxing, gentle, and peaceful relaxing aroma • Sacred Frankincense: Which adds a grounding, balanced aroma • Valerian: Which helps create a relaxing environment; the herb has been used for centuries • Rue: A key oil in RutaVaLa Roll-On (Another great bedtime oil) • • • #backtoschool #kidsroutine #oilup #yleo #sleepyize #sleepyizeforthewin #chaos #calm #relax #preschoolroutine #essentialoils #relaxtion #mamassavinggrace #boymom #motherofboys #crazychildren
☀️ July Promos! ☀️
🧡 🧡 🧡 #liveoola #quotes #quotestoliveby #bestthings #patience #oola
SO EXCITED ‼️🎉 From now until May 31st every NEW MEMBER gets a FREE Thieves Household Cleaner and a glass spay bottle!!! 👏👏 Enrollment promotion details: *New enrollees will receive a bonus 14.4 oz. bottle of Thieves Household Cleaner and a glass spray bottle. *The purchase of a Premium Starter Kit is required to receive bonus items. *People with a primary billing address in the United States, APO, or NFR regions are eligible to participate in this promotion. *Only first-time enrollees are eligible. *Promotion runs from May 20 at 8 a.m., MT, through May 31 at 11:59 p.m., MT. *New members will receive their promotional products within 30 days of their first order. FAQs Q. How long will the promotion run? A. This promotion will run from May 20 at 8 a.m., MT, to May 31 at 11:59 p.m., MT. Q. Which Young Living markets can participate in this promotion? A. The U.S. market can participate in this promotion. APO and NFR markets may also participate. Q. Which customer or rank types can participate in this promotion? A. Any rank can participate in this promotion. Q. Can NFR customers participate in this promotion? A. Yes, NFR customers can participate in this promotion. Q. Can Professional Accounts customers participate in this promotion? A. No, Professional Accounts customers cannot participate in this promotion. Q. What products are included in this promotion? A. New enrollees will receive one 14.4 oz. Thieves Household Cleaner and one glass spray bottle with the purchase of a Premium Starter Kit. Q. Are there any ordering limitations? A. New members must purchase a Premium Starter Kit to qualify for product earnings. Q. When will I receive my free products? A. Qualified participants will receive promotional products within 30 days of their first order. Q. Do reactivated accounts qualify as new enrollments? A. Only first-time enrollees will be counted as new enrollments. Reactivated accounts cannot qualify. Visit my link above for more info!
Happy May! 🌷New promos are here!
For a limited time only, Young Living is bringing back member favorites Idaho Blue Spruce, Myrtle, & Elemi! • Idaho Blue Spruce has been out of stock for over a year, Myrtle hasn't been available as a single for 2 years & it's been a while for Elemi too! • How to Order: On Thursday, April 25, at 8 a.m., MT, in Virtual Office under New & Featured > Promotions • 🌲 IDAHO BLUE SPRUCE 🌲 Why do you want to be sure to get your hands on it? Idaho Blue Spruce has the HIGHEST FREQUENCY of any oil at 580 MHz! It even beats out our coveted Rose 🌹 oil at 320 MHz. INCREDIBLE! It has a pleasing, relaxing evergreen aroma. Blue Spruce helps ground the body (as all evergreen essential oils do), recharging, rejuvenating, & creating a feeling of emotional balance.🌲🧘‍♀️🧘‍♂️🌲 I love to diffuse it, add it to perfume rollers & use it in the bedroom...um yes! This is the bomb diggity for every (wo)man! It enhances feelings of confidence & masculinity & supports testosterone levels...you want your man to have healthy levels 😉🥰🥳. ++++ ✨ MYRTLE ✨ Myrtle is a POWERHOUSE!!! It is supportive of the respiratory system, skin, & hair, & has been researched for its effects on glandular imbalances. It is also helpful for emotional support & lifting the spirit. 🙌🏻 The main constituents include Alpha pinene, Eucalyptol & Limonene. Myrtle is a key ingredient in Purification, RC and EndoFlex! Myrtle’s chemistry is very similar to frankincense essential oil. ++++ 🌿 ELEMI 🌿 Elemi is honestly an unsung hero! I mean, it's called 'Poor Man's Frankincense!' 😂 Elemi's cousins are frankincense & myrrh who get a LOT of attention. So let's give Elemi some extra love today! Elemi is produced from pili trees on the Young Living farm in the Philippines with a very sustainable harvesting process. We take great care collecting the resin so the trees or ecosystem aren't harmed at all. Elemi is AMAZING for uplifting your mood. lt has traditionally been used to reduce lines & wrinkles associated with aging; 👵🏻 & is supportive of healthy skin. Also for soothing muscles discomforts after exercise. Elemi is an excellent addition to your nightly skin care for extra moisture & smoothing effects!